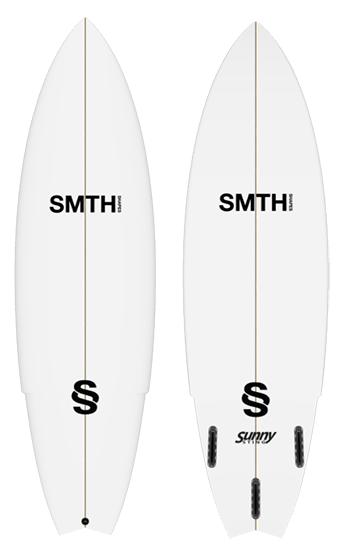 The Sunny Sting is a revamped memorable classic blast from the past.

Mid-July 1985 Sunny introduced me to his Aipa Stinger’s, both he and Shmoo had been riding Ben’s stingers months before them arriving to complete in the Gunston 500.

At that time I was licensed to T&C Hawaii and Sunny was staying with me. When he pulled boards out from his board bags I was intrigued by the way Ben had blended the Stinger-wing to fit and flow in the rail outline. The attention to detail in the rail design was outstanding!

The break in the rail where the sting is situated is very functional and carries volume forward. Behind the Sting, the wing pulls in reducing area and straightens up the rail line through to the tail. This transformation helps to carry speed but still allows for positive control and maneuverability. The slightly wider nose area allows you to have extra float and paddle power. The tail section is pulled in as the wing cuts it’s way into the rail blending towards the tail section with a straighter rail curve allowing you to pivot at will. This is the main function behind the Sting.

Like most surfboard models we want the back 1/3 of the board to react better, go faster, and be more functional! This is the concept behind the Sting. We want a craft with a taste of the past that incorporates today’s modern performance features.

CUSTOMISE YOUR BOARD
FEATURES
DIMENSIONS

The bottom rocker consists of a low natural curve with a modern deep concave running through the hull into a flatter curve in the tail.

The Outline consists of a two-stage theory. As the nose outline is slightly wider than normal with soft forgiving rails whereas behind the Sting which is situated at +-20″ up from the tail the outline pulls in, causing the rail-line to straighten up. The straighter rail line adds more drive and enhances speed when burying the rail.

The rails play a huge part in maintaining speed because of its design in the tail section. The rail starts with a rolled medium-soft tuck and becomes boxy behind the wing with a hard “off the bottom” edge. The boxy upright rail behind the sting prevents water from sucking onto it, thus frees up the tail. Less drag and more speed!

Previous Next
Close
Test Caption
Test Description goes like this
Manage Cookie Consent
To provide the best experiences, we use technologies like cookies to store and/or access device information. Consenting to these technologies will allow us to process data such as browsing behavior or unique IDs on this site. Not consenting or withdrawing consent, may adversely affect certain features and functions.
Manage options Manage services Manage vendors Read more about these purposes
View preferences
{title} {title} {title}