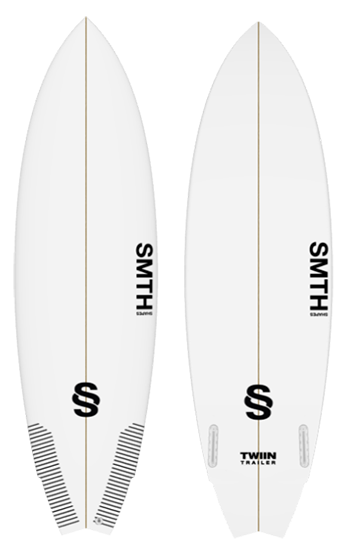 Twin Trailer a modern surfboard that’s stood the test of time!  I shaped MR twins in 1980 at Shaun Tomson’s factory as they started to emerge onto the surf scene.

Jordy wanted to have a fun performance twin that would accommodate smaller wave conditions. So we played with our modern fish outlines and designed a flatter longer curve throughout the bottom. We started working on the bottom curve by lowering the entry rocker and combined with our tested single to double concave bottom blending into with a slight Vee behind the back fins. The outline is very similar to our “old school” twins but tweaked it to perform better.

With a wider nose, we didn’t drop the rocker too much keeping the tail rocker flatter for speed and less drag in those gutless weak waves. We stuck with Jordy’s progressive rail using soft tuck-under up in the nose area and used a “beak nose” to add volume under the chest area. Unlike most Twins, we did not pinch the rails in the tail  – we wanted more skate and glide through turns to maintain speed in gutless conditions.

We want you to experience speed, flow, and maneuverability with control in mind.

CUSTOMISE YOUR BOARD
FEATURES
DIMENSIONS

Previous Next
Close
Test Caption
Test Description goes like this
Manage Cookie Consent
To provide the best experiences, we use technologies like cookies to store and/or access device information. Consenting to these technologies will allow us to process data such as browsing behavior or unique IDs on this site. Not consenting or withdrawing consent, may adversely affect certain features and functions.
Manage options Manage services Manage vendors Read more about these purposes
View preferences
{title} {title} {title}